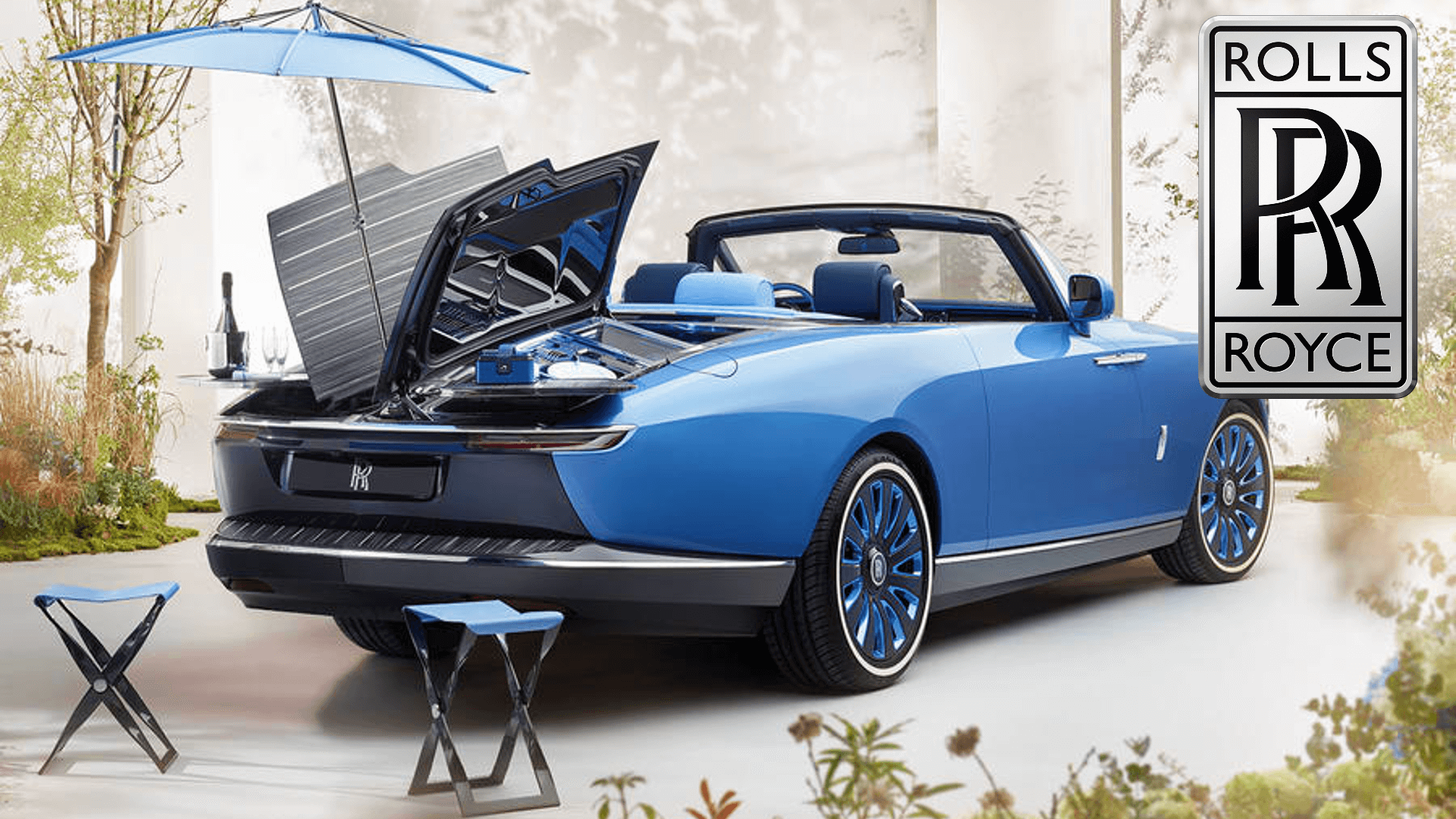 Welcome back for the 4th and final part in our journey of every Rolls Royce from 1904 to present day.

If you haven’t already taken a look through part 1, part 2 or part 3 then we suggest you do so HERE:

Please Note: All the links to the images in this article can be found below the relevant images.

Launched in 2003 the all new Phantom version seven (VII) was the first Phantom to be produced under BMW and they certainly did not disappoint, following Rolls Royce original design identity, philosophy and build techniques, but also taking the car to the next level, the Phantom was and did become the company’s flagship model, and  upon its release it was an instant success spanning throughout its production years of 2003 to 2017.

The Phantom came with a plethora of items as standard as well as many additional features and options, far too many of them to list here, just to give you some idea there was a choice of 44,000 different paint and leather colour combination options available.

The design is very reminiscent of the Silver Spirit / Silver Spur of 1980 to 1988 with a more boxy square design. The phantom however now came with suicide rear passenger doors harking back to the Phantom of 1925, the Spirit of Ecstasy was now electronically retractable preventing thieves from stealing it and passenger umbrellas were fitted into the doors. Apart from that the Phantom came with a brand new 6.75L V12 petrol engine capable of 0 to 60 in just 5.8 seconds, not bad for an aluminium tank weighing in at just over 2.5kg.

The Phantom 7 came in two different series, the first series or series I was produced between 2003 to 2012, with Series II coming in in 2012 to 2017, the main differences being a facelift redesign.

In 2005 an extended wheelbase version was released making the vehicle 9.8 inches longer:

And in 2007 (to 2012) a two door drophead Coupé version was released with suicide doors:

The Phantom 7 Series II from 2012 to 2017 definitely took the previous design and made it all that more imposing.

The Ghost though paying homage to its predecessor the Silver Ghost of 1906 to 1926 had in fact been designed for some of the same and many opposite reasons, where the Silver Ghost was constructed as Rolls Royce’s large flagship model the Ghost was built marginally smaller but far better proportioned more like that of the Rolls Royce Twenty of 1922, and just like that of the Twenty the Ghost became a more popular vehicle to be chauffeured around in, whereas more of the larger Phantoms were privately owned and driven.

The Series I Ghost was produced between 2009 to 2014 and Series II between 2014 to 2020 and the Second generation or Series III 2020 to present day, the Ghost was initially named the RR04 before it was released, thank god they decided to change it.

Now though the Ghost was far cheaper to manufacture as it wasn’t built from the ground up, utilising the BMW 7 Series platform and roughly 20% of it parts and components, as well as many of the Phantom’s components, Rolls Royce certainly didn’t cut any corners, the Ghost is not just a better proportioned vehicle, it’s built as well as the Phantom while being faster and more nimble if and when required.

The Ghost  is instantly recognisable, possibly one of Rolls Royces most popular vehicles to date, sleek lines, subtle but imposing while carrying many of its traditional elements, is completely unique in its design.

The Series II had a very subtle but incredibly noticeable facelift making it look more similar to the Phantom:

And the Second Generation (Serie III) other than a few minor technical updates had a larger redesign almost changing the design back to that of the original 2009 release:

And in 2011 a long wheelbase option was made available:

The Rolls Royce Wraith (II) took its name from the original Wraith built back in 1938 to 1939 and was built to replace the Rolls Royce Phantom Coupé, which it didn’t resemble, no, in fact it looked almost identical to the Series II Ghost (above), though it was bigger having been built on the same platform as the seventh generation Phantom, which is kind of strange as the previous Phantom Coupé was built later but alongside the seventh generation Phantom of 2017, so you would have assumed the Wraith (II) would have come after the eighth generation instead.

That all said the Rolls Royce Wraith turned out to be a pretty awesome design, it took the large, almost brash features of the Ghost and turned it into a sporty looking two door, which in my opinion looks fantastic.

The Wraith was available from 2013 to 2022 and came with the same 6.6L V12 engine as in the Ghost but this time turbo-charged and capable of 0 to 60 within 4.4 seconds, and a handful faster! The car was so popular that several very cool variations of the design were made.

If you had been following Rolls Royce’s history you would be a little confused with the release of the Dawn. Built between 2015 to 2022 in the usual hand built fashion the Dawn was built to replace the Phantom Drophead Coupé, however confusingly it was built on the slightly smaller Ghost platform, and its design like that of the bigger Wraith built on the seventh gen. Phantom was far more inline design-wise with that of the Series II Ghost, not the Phantoms. Nonetheless it was and still is a great looking vehicle.

The Dawn which was named after the Silver Wraith of 1946 to 1958 came with the same N74 BMW 6.6L V12 engine as the Wraith, and just like the Wraith many versions of the Dawn were released.

The Rolls Royce Phantom (VIII) was released in 2017 and is still in production today, but unlike Rolls Royce’s usual motor show debuts the Phantom (VIII) was unveiled via livestream on 27th July 2017 and on the 29th July a special exhibition was held for two days at Bonhams auction house in Mayfair, extremely clever marketing if you ask me, creating an online buzz, then concreting the brands Britishness by being held within a British institution, while inciting a anxiety to want one by being held in an auction house.

The Phantom eighth Gen. had the same 6.75L BMW N74 V12 engine as its predecessor but inevitably had newer gadgets like 3D camera view, gallery display… as well as new suspension and four wheel steering.

Personally though the new Phantom certainly resembles its predecessor I feel it has taken some more design cues from the earlier Post-War Phantom’s 1946 to 1990.

Now the Cullinan was and still very much is a rather unusual and extremely controversial release from the brand, as every carmaker under the sun decided to jump onto the SUV bandwagon, Rolls Royce decided they too wanted a piece of that pie, and though the design is recognisable taking its exterior directly from the eighth gen. Phantom, the design was stretched out to fit a taller frame which drew a lot of controversy due to not just being an SUV, as based on their current stock of large vehicles Rolls Royce didn’t need to enter the realm of SUV’s, their cars were already big enough, and though certainly built to the highest standards its design upon its debut just missed the mark. But like most (not all) new car designs that we initially dislike, or are unsure of, it has in my mind improved with age, it’s no Dawn, Ghost, Phantom, or Wraith but it’s smart enough and instantly recognisable.

The Cullinan was an initial thought on a sketchpad almost 10 years ago and it took quite a number of years from design, to concept, to actual production, the first concept vehicle was on display back in 2015 but a test vehicle wasn’t ready for testing until the following year 2016, and due to a multitude of changes and refinements the car was not released until 2018 (and is still in production today).

Other than its height the Cullinan keeps similar dimensions to the eighth gen. Phantom as well as using many of the same components and tech as the Phantom, such as the same 6.75L engine, four wheel steering system… but adding such gadgets as folding luxury picnic seating for two and a little table, ideal for sharing champagne from.

Though one-off Rolls Royce’s were certainly not as rare or unique in the companies early years as the majority of vintage Rolls Royce’s were built in separate parts with the bodywork being made by independent coachworks allowing for additions to the design, it wasn’t until approximately 90 years later that the first all in-house bespoke one-off car was made.

Now the Sweptail was the brainchild of one of Rolls Royce’s customers, they wanted to combine their love for super-yachts and private aircraft into a two seat road yacht, they took their ideas to Rolls Royce’s design department in 2013 and by 2017 they made his dream a reality, well which carmaker wouldn’t at a cost of £10M to manufacture, nonetheless this is a pretty stunning vehicle.

Other than being built on the Phantom VII platform the Sweptail was almost completely bespoke.

If a £10M one-off Rolls Royce simply wasn’t cutting the mustard then maybe a £20M one would?

The Boat Tail has to be (in my opinion) the ultimate in ultimate two door convertibles, that’s if you don’t mind a huge vehicle measuring 5.8 metres in length, with four passenger seats and virtually no boot space, yep, no boot space, not to say it doesn’t have a boot as such, it’s just that it is filled with a cleverly tailored made luxury picnic set with seats, tables…, and a parasol, with a shoebox size space underneath to keep you cucumber sandwiches in. Either way if you are planning a long weekend away for two, you will struggle to find a better mode of transport for your trip then the Boat Tail, well at £20M you would certainly hope it was.